a walk in the fields

So I have been back detecting again for nearly a year now and I have pretty much been on the same permission for that entire time. The two fields where I detect were kept by my family when the rest of the land which they owned for their orchard farming business was sold off in the late 1960’s. I have struggled to get other permissions locally so I feel incredibly thankful to have these two fields in which to wind away the hours listening for bleeps and beeps.

So far my finds have taken me on quite the historical journey including Celtic, Roman, Anglo-Saxon and Medieval right through to Victorian times and the modern day. Nothing I have found has been of any significant value in monetary terms but these fields have proven to be rich with history. They have also proven to be plentiful with bits of old farm machinery, I reckon I’m pretty close to being able to build my own tractor!

During this time I have also become quite friendly with Keith Fitzpatrick-Matthews the Curator and Heritage Access Officer at North Herts Museums. Keith has been an amazing wealth of knowledge and very patient in taking the time to help identify the things I find and also in letting me know what needs to go to the Finds Liaison Officer. It turns out that Keith has studied and written about the history and archaeology of the general area in which I’m detecting so I feel fairly confident that he is genuinely interested in seeing what finds come up.

I have known for quite some time that there is what is thought to be a Roman Bath House not too far from where I detect so I have been quite hopeful in finding Roman items. To that end I have had 3 Roman coins so far, but I have also been told that these fields have been detected on by many others over the years so I do wonder if there is much else left to find.

I quite often walk the dog around the area where the Roman Bath House is believed to be and I always think to myself how good it would be to be able to detect around there. It’s an Ancient Scheduled Monument so no detecting directly over the bath house would be allowed, but surely the field surrounding it could be? I decided to ask Keith if he knew who the land owner was, and his reply resulted in the highlight of my detecting journey so far.

It turns out that Keith did know and that he had been planning a field walking day with local councillor Sam Collins for when the crops had been harvested. His intention was to see what evidence of Roman occupation could be found and he said that a detector survey would be a useful addition to that. Yes you heard it right, an archaeologist inviting a detectorist to be part of an archaeological field walk! You can imagine my excitement to be able to detect on known Roman occupied land which I had been longingly looking at and walking around for years.

Keith and Sam had put a call out in the local paper for volunteers to come along and take part in the field walking exercise so that more of the field could be covered in the one day that they had available. On the day around 50-60 people turned up all of varying ages, backgrounds and interests. As we all gathered around, Keith explained to everyone what it was they were looking for, how to bag it, label it and record where their finds were being found using What Three Words. People were put into groups of 3 or 4 and given a direction in which to walk scouring the ground for evidence of what might have once been there.

For the morning session I was the sole detectorist and I set off walking my line in the hope that I was going to pull up some good Roman finds. By the end of the day I had found nothing Roman, not one Roman item. I couldn’t understand it, the field walking session itself had ended very successfully with lots of evidence of Roman occupation and even a Mesolithic Tranchet Axehead was found, but for me, not a jot. Later in the afternoon another detectorist stopped by and informed Keith that the area had been extensively ‘Night Hawked’ by a group of detectorists some years ago and as you can imagine my heart sank at this news but it would also explain my lack of Roman finds. 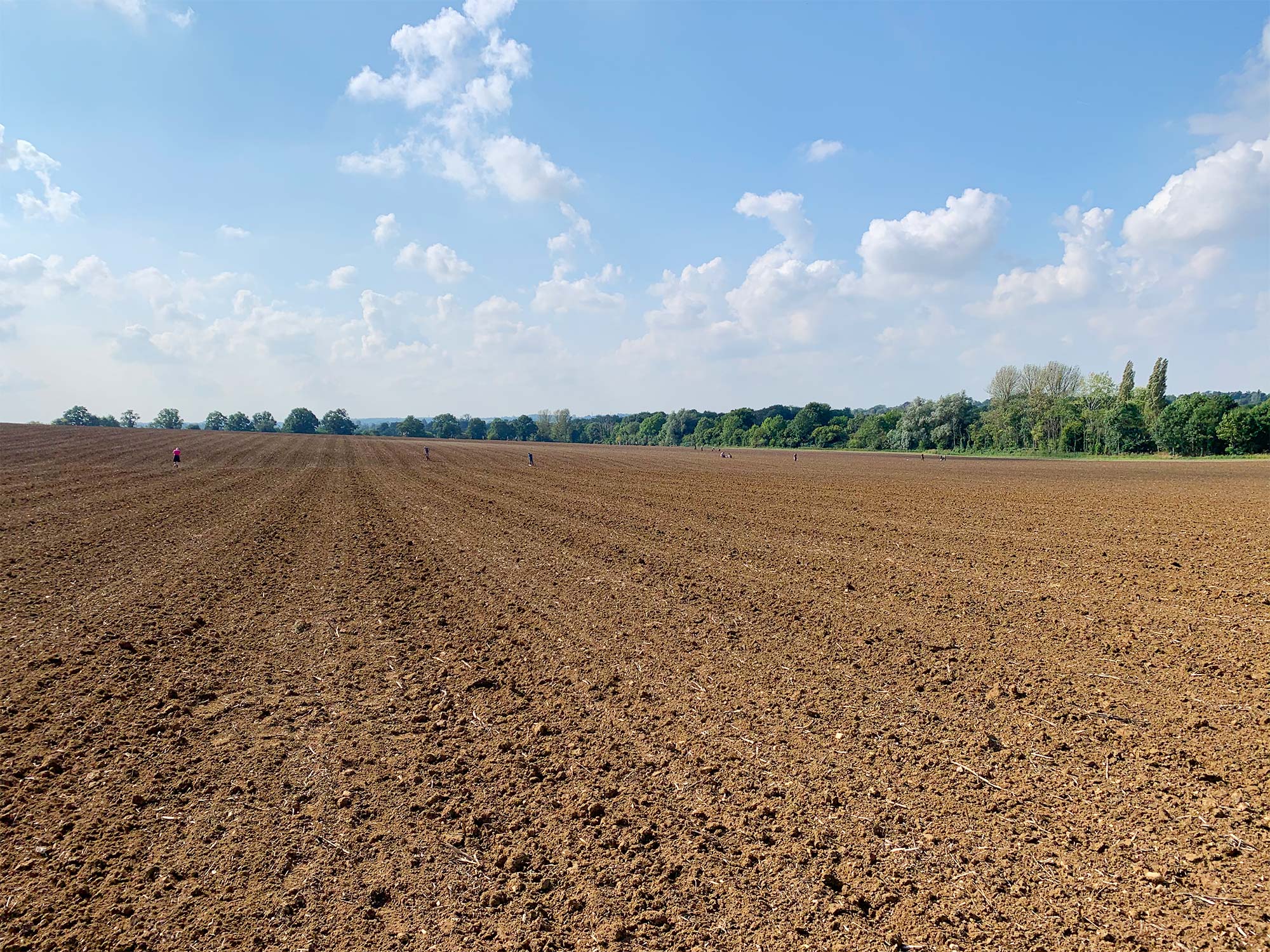 What else lies beneath the earth!

Thats not to say I didn’t have any finds, there was the odd button, bits of farm machinery and a lead bag seal, but then there was something that actually turned out to be a little bit special. Keith and I were both unsure of what this find might be so he suggested I take a look through the Finds Identified books when I got home to see if there was anything similar, and sure enough there was! I actually think Keith knew what it was but decided to send me on my own little journey of discovery.

I have also become quite friendly over email with the editor of a certain best selling detecting magazine during my new found love for the hobby. It turns out that where I detect is part of his old hunting ground so like Keith I think there is a genuine interest in the things that come up. I emailed pics of the find to him and this was his response, “That area has been well hit over years – however that is a Celtic loop and toggle fastener, probably the best example I’ve seen”.

With that news I wanted to find out more. The find is now in the museums possession but I had taken my own photos so I sent those to Matt Fittock our Finds Liaison Officer to find out what his thoughts were on the find… “Yes, that looks to be late Iron Age to me. It’s definitely a loop fastener but that extra plate on top is unusual and it’s generally the style of similar late Iron Age mounts. Date wise I would say it’s somewhere between 50 BC to 50 AD based on this and the general chronology of loop fasteners overall.” He then went on to say, “It would be good to have crisp and perfectly focused images for something like this; it’s a pretty rare example as far as I can tell. It’s a really nice find.” 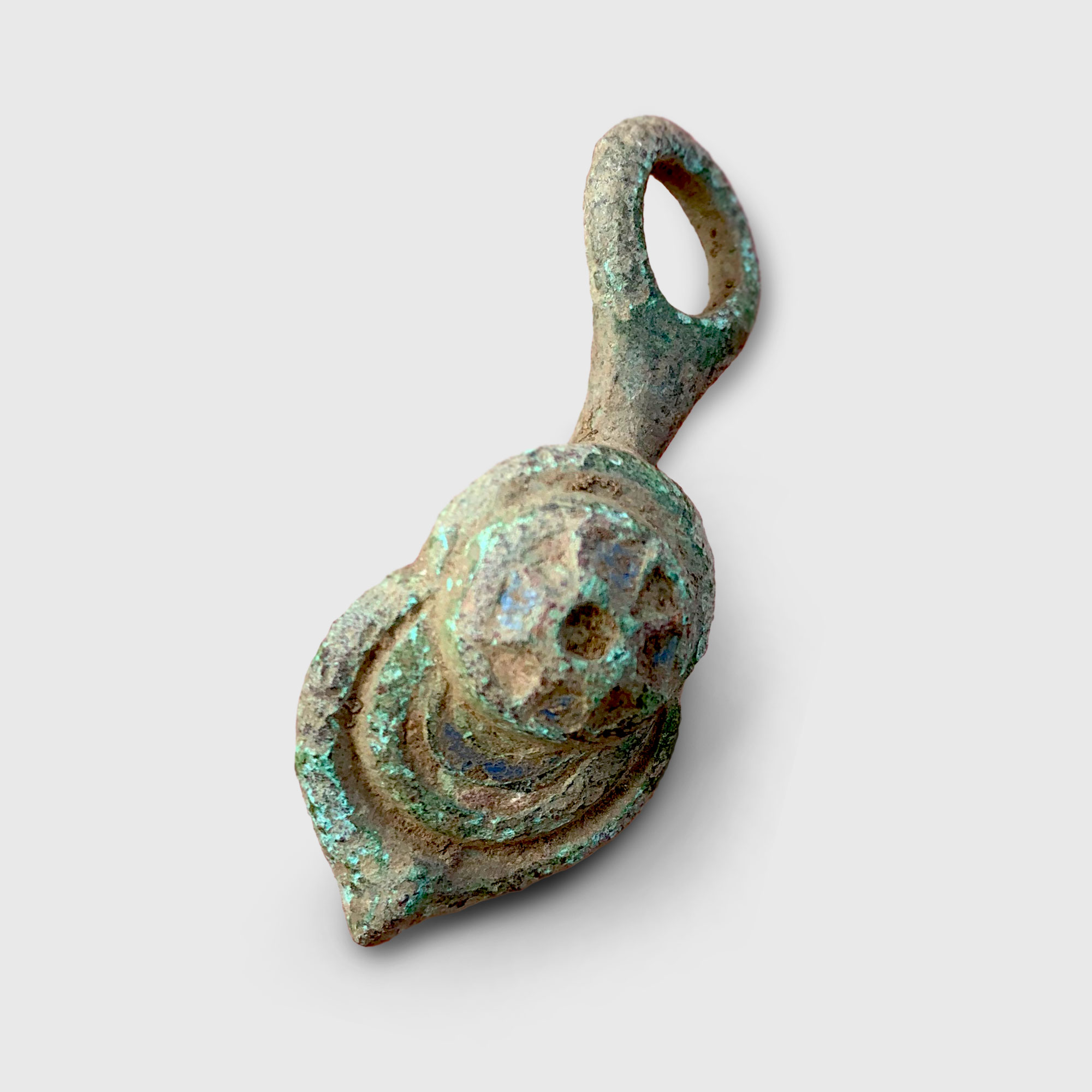 The Celtic loop and toggle fastener.

So what I thought was a bit of a disappointing day on the finds front actually turned out to be pretty successful. On the whole the day itself was a great success in that it gained the archaeological aims that Keith had set it out to do. Everyone involved seemed to enjoy themselves, but for me, to be part of this archaeological event as a detectorist was a great privilege and I can’t thank Keith enough for the opportunity. It just goes to show that detecting can be of benefit to archaeology and it has certainly given Keith food for thought as it’s possible that this find might be evidence of an Iron Age settlement in the area.

So that just leaves me to wonder about this Celtic Loop fastener, and this is the part of the hobby that I really love. It’s one thing feeling the buzz of unearthing a good find, but it’s quite another to imagine it’s place in a person’s life over 2000 years ago. This is an item that had a purpose and regularity in the day to day living of our Celtic ancestors. It’s a connection between them and us, a reminder of what we once were and it really does go a long way to painting a picture in my imagination of what life could have been like back then. I wonder if someone will feel the same awe and excitement in another 2000 years when they unearth a Levis zip!

But this isn’t the end, Keith has extended an invitation to another field walk in mid October so the story will hopefully continue…

P.S. Since writing this blog the Loop and Toggle Fastener has now been recorded on the PAS database. It has been listed as a find of note and has been designated: Potential for inclusion in Britannia. Click on the Portable Antiquities Scheme link to view the record. 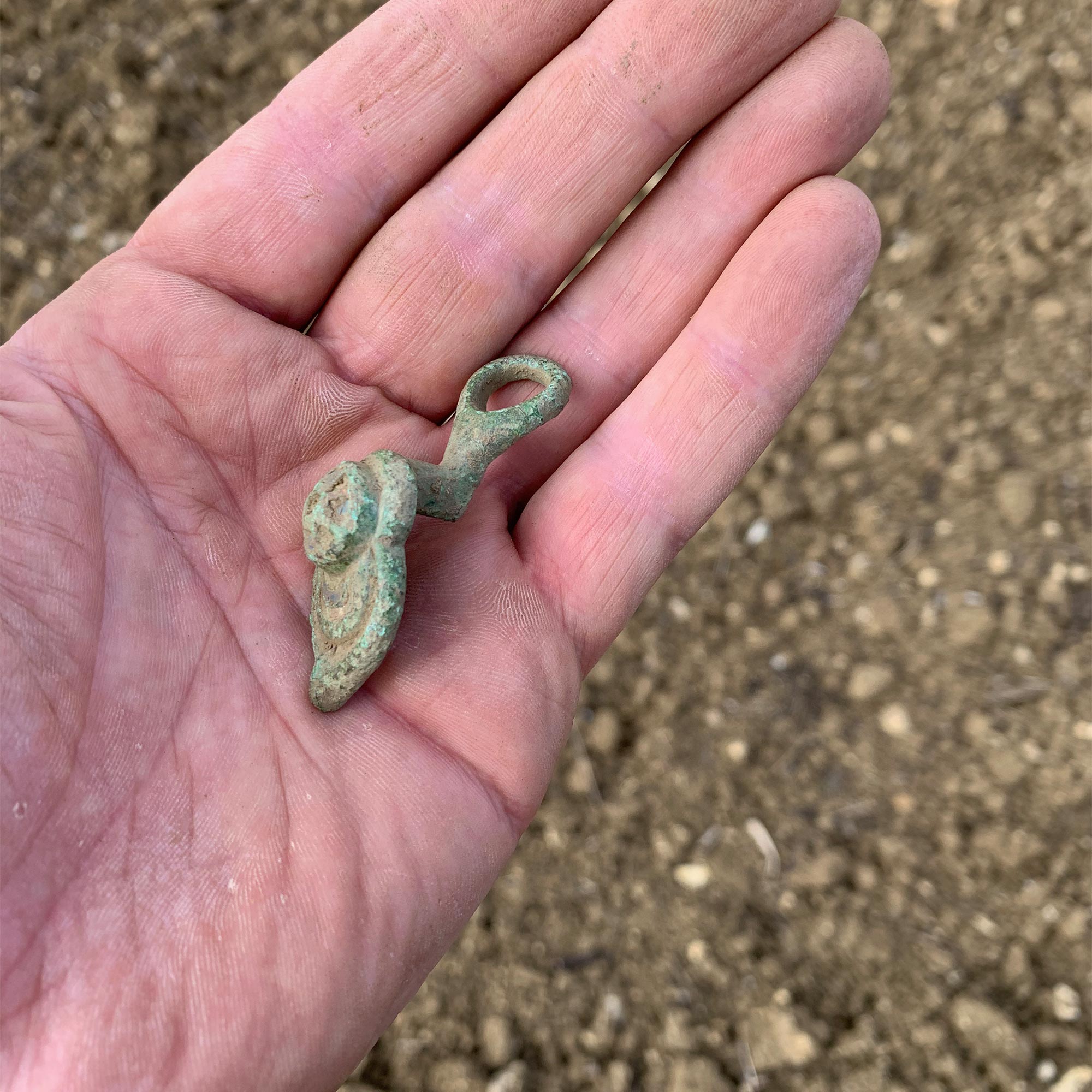 Front and side profile. 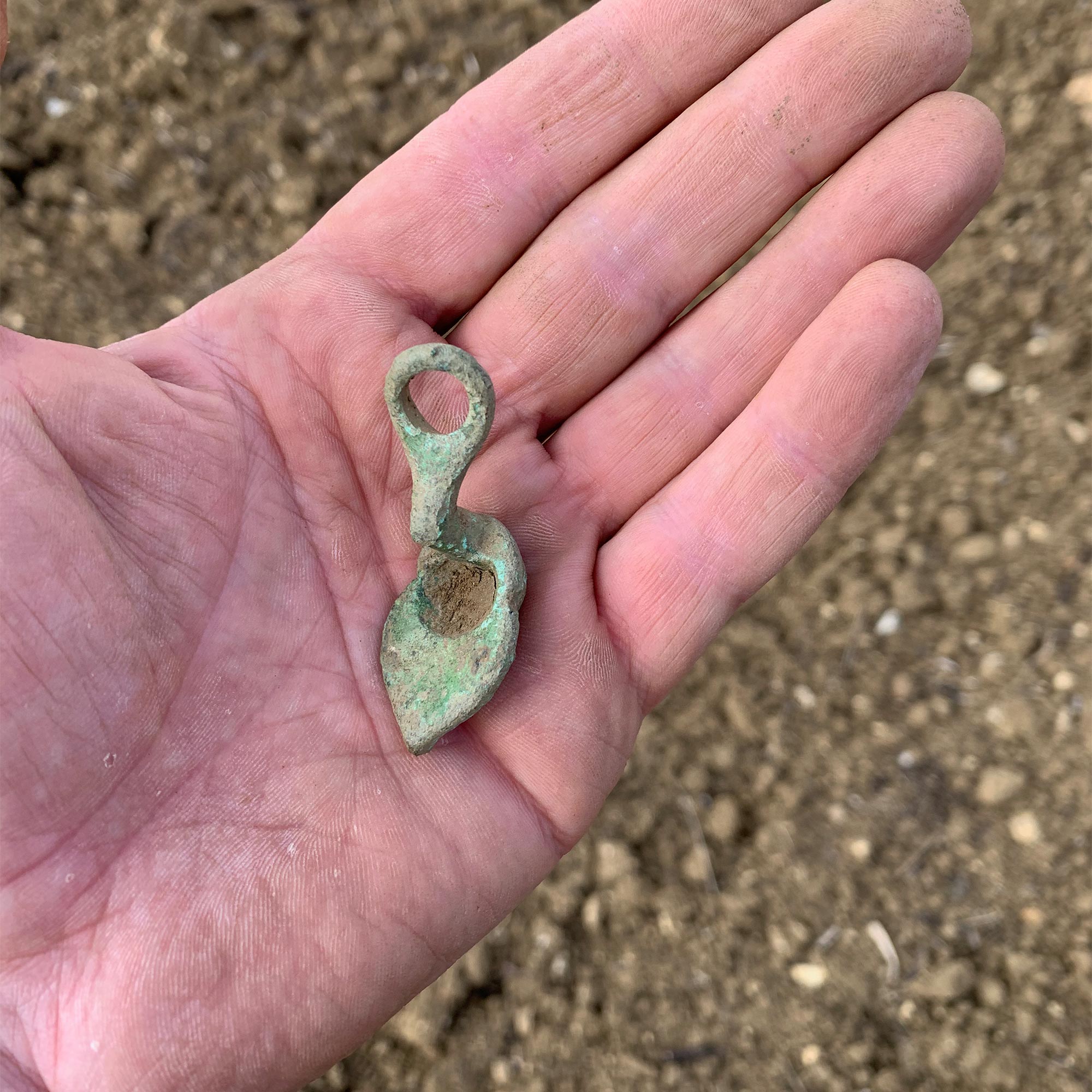