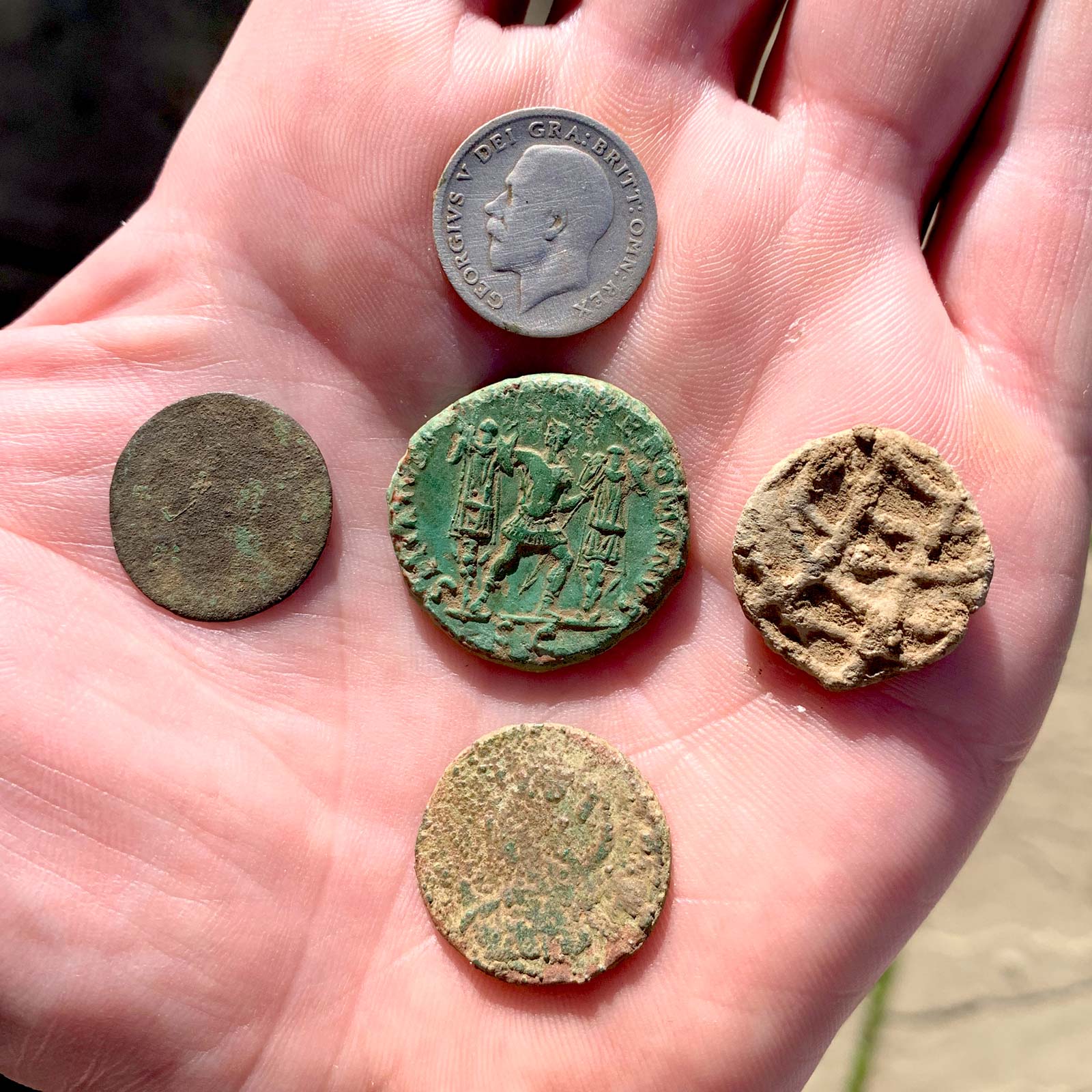 another walk in the fields

So in my last blog I said there might be another field walk taking place in mid October, which I had been invited to attend again with my detector. Keith Fitzpatrick Matthews the Curator and Heritage Access Officer at North Herts Museums and Councillor Sam Collins scouted out the new field one October morning to see if the conditions would be conducive to inviting volunteers on another field walk. After the success of the last field walk I was hoping for another sunny day full of enthusiastic volunteers looking for evidence of the past. But alas, it was not to be.

The field in question would only be available between crops coming out and going in, so there was a very short window of opportunity. The weather hadn’t been favourable so conditions weren’t great for conducting a volunteer based field walking exercise. Keith contacted me to let me know the decision, but he also had some good news. He informed me that I had been granted special permission by the land owner to continue the detector survey that the museum wanted to include as part of the field walk.

I had two weekends in which to search a field that was incredibly muddy and which was so big I couldn’t fully see it from end to end! I was told I had the permission a day before the first weekend and luckily I had no plans. I was out bright and early the next morning, full of excitement and expectation. I decided that I would detect around the perimeter first and then work my way inwards and try and tackle the field in sections. 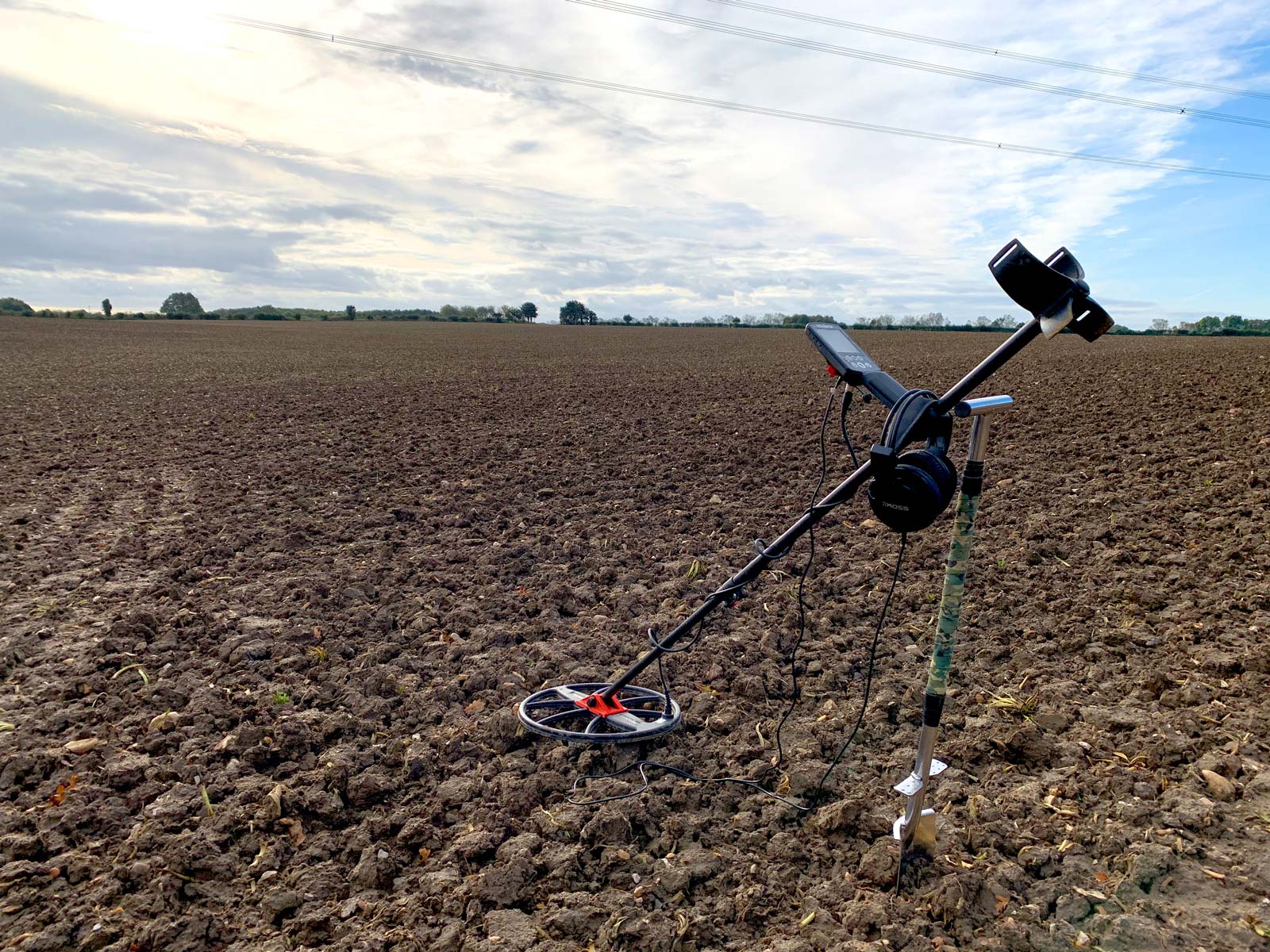 My muddy office for the weekend!

My first find of the day was a medieval lead token which was in pretty good nick, it certainly gave me hope that there would be some good finds to come. After that though things were pretty quiet right up until lunch. I had parked in a lay-by near the field so I went back to the car for half an hour before starting my afternoon session.

When I got back into the field I was quite surprised to see another detectorist out there getting his swing on. He approached me and was quite friendly and chatty. It turns out he had spent the morning searching the surrounding fields, he asked if I had found anything to which I replied “not much really, I only have permission for this one field!”. Having made the point that I had permission, things then became a little uncomfortable and he went on his way.

I contacted Keith to see if anyone else had permission to be there and his reply was quite telling, “That’s very concerning: the land owner has a blanket ban on detecting, which they have waived for this specific project. The other detectorist is there without permission!”. It’s worth noting at this point that it appears to be quite a privilege to be granted access by this land owner to detect on their land. Historically it’s unheard of that they grant permission and if my detecting survey hadn’t been included as part of Keith’s field walking project then I certainly wouldn’t have had this fantastic opportunity! 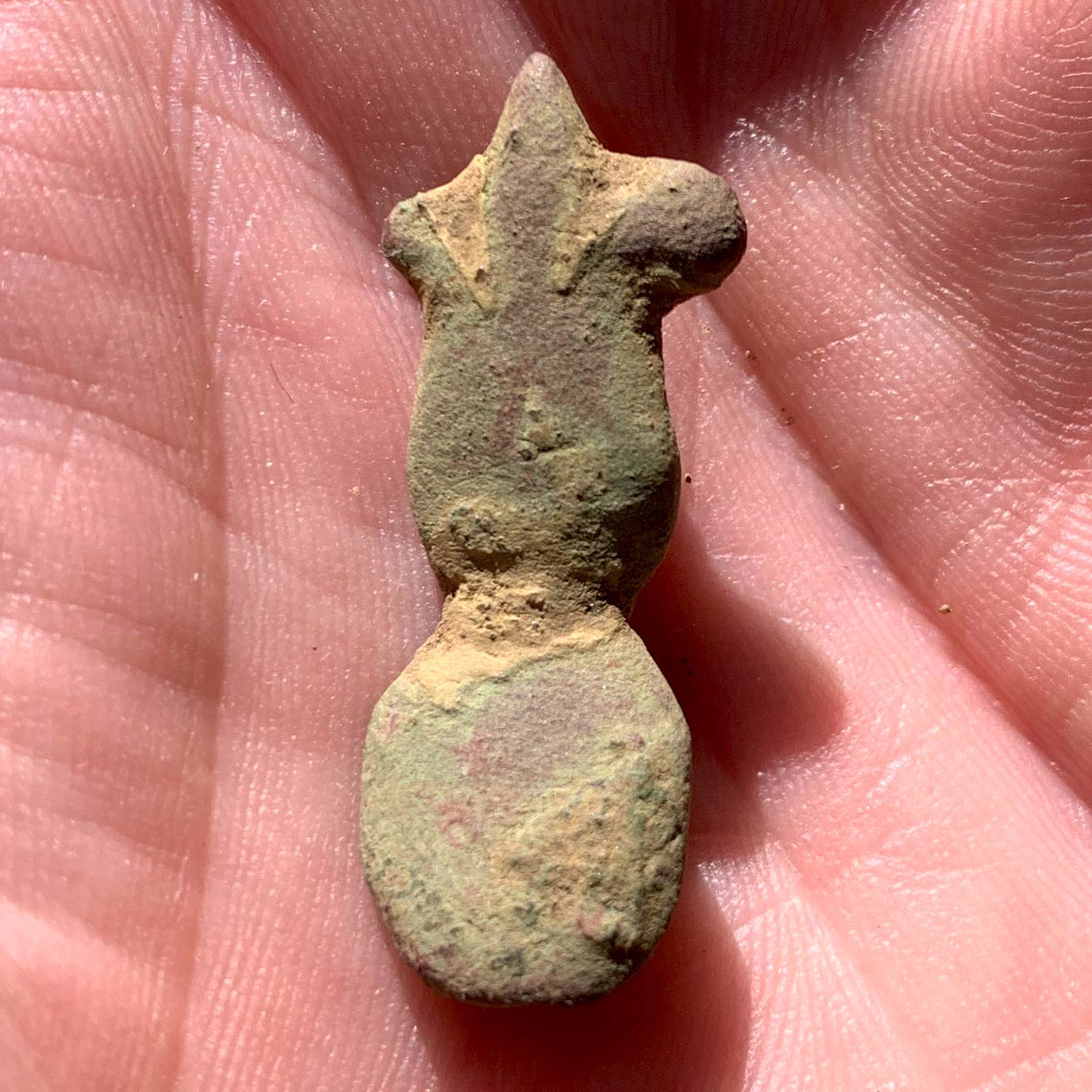 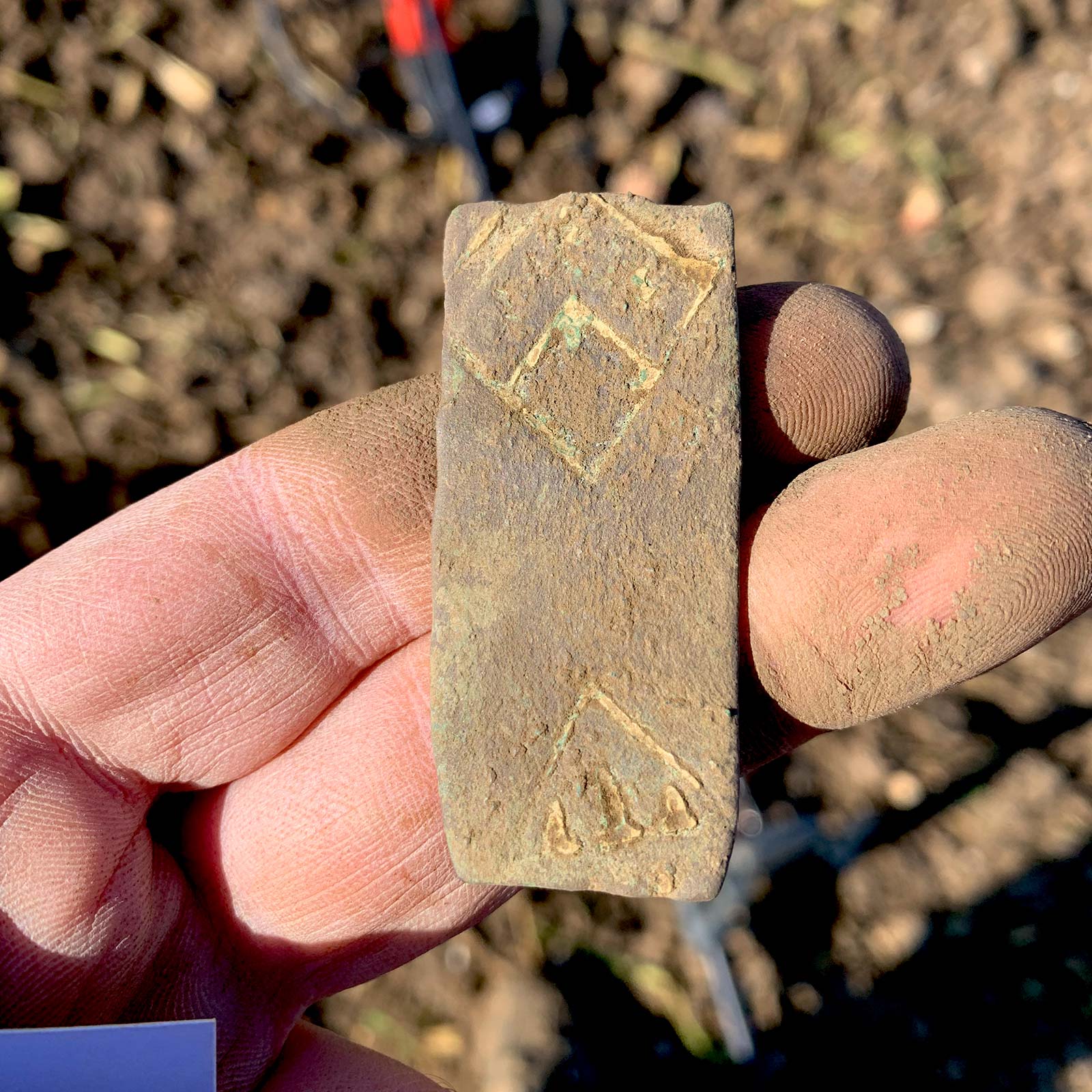 The fact that this guy obviously knew he was there without permission left me feeling quite angry. He had good kit and looked like a season detectorist so he must know the do’s and dont’s that the majority of detectorists abide by. Is it any wonder that it’s becoming harder and harder to secure permissions when trust is being ebbed away by the actions of people like this. I just hope that if he did find anything that he at least had the decency to record it with the Portable Antiquities Scheme, but I fear that’s very doubtful.

I carried on my afternoon with varying results. I had a few of the usual suspects, some 20th century coins, a couple of nice medieval buckles, a few musket balls and what could possibly be part of a medieval strap end. I trudged off the field just as dusk was setting in feeling a little disappointed. Like the last field walk I was hoping for some good Roman finds but unfortunately it was the same result, nothing!

The next day I was up at the crack of dawn and straight back out there! Thankfully I never saw another detectorist for the remainder of my survey, don’t get me wrong I love doing group stuff but only when the permission is in place to do so. The second day was much like the first in that I wasn’t finding anything Roman. It started to make me wonder if this field had been cleaned out by illegal detecting as well, much like the Roman bath house site appears to have been. Not deterred I carried on and I’m so glad that I did. The best find was at the end of the day, by which point a friend of mine had popped over with his dog to see how I was getting on. It was then that I unearthed the best Roman coin that I have found to date. 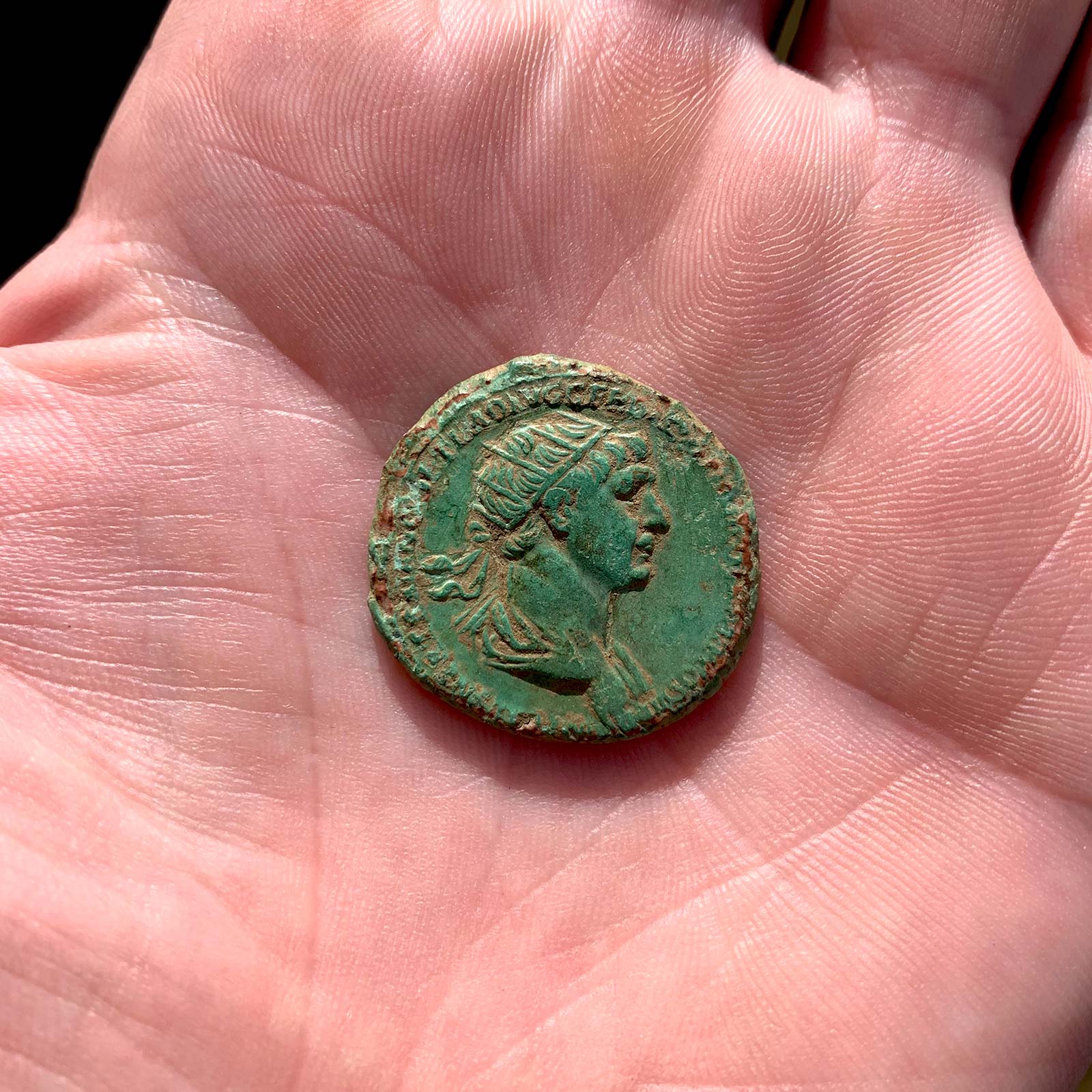 I had a good clear signal, the type that usually tells me I have an item with some copper content. About 5 inches down at the end of the clod that I pulled out was a little slither of green. As I pulled at this green edge it fell away to reveal a perfect bust of Trajan, and it was stunningly clear as you can see by the pictures. This is the first time that I have actually given a shout of joy at finding something whilst detecting. Even more surprising was the condition of the reverse, the detail was just breathtaking. I’m glad my friend was there to share in the moment, it’s one of those firsts that I definitely won’t forget. For those that follow my detecting journey on instagram you will have noticed that I have milked this find a little bit, but who wouldn’t. I know Roman coins are pretty common finds, but in this condition and with that beautiful green patina, not often.

The next weekend I only had the Saturday on which to detect due to other commitments. In all I had a good mixture of stuff that included coins, buttons, a few medieval bits, a big but broken crotal bell and a possible medieval pin head. So on the metal front things had gone pretty well I think, but it wasn’t just metal Items that I was picking up. Had the field walk gone ahead, then the purpose of it would have been much like the last one which was to look for finds on the surface, like pottery and tile fragments, evidence of the past.

A collection Roman items together.

Not having a trained eye for this sort of thing I did my best to pick up the odd bit here and there and it turns out it was a good thing I did. As my detecting was part of a project for the museum everything that I found had to be handed in to Keith. When I met with Keith we went through the finds and a good portion of the pottery items I found turned out to be Roman, I even found what might be a piece of Roman mosaic tesserae.

The very last thing I found was also just lying on the ground. It looks like it could be the stem of some kind of vessel, possibly a wine cup. It looks like it should be made of glass but the problem is that it is jet black and it has no translucency, even when a high powered LED light is shone on it. I was so intrigued by it that I looked up Andy McConnell (The glass expert on BBC’s The Antiques Roadshow) on instagram and messaged him to see if he could throw any light on the matter. He was kind enough to reply and said he thought It looked like early 17th Century furnaced formed glass and that it was probably the stem of a wine vessel. He asked what colour it was and when I told him it was jet black he said there was no such thing as truly ‘black’ glass. He said it was probably a very deep green and that shining a light on the thinner edges would show this, but it didn’t. This started to make me think that it might be obsidian, but I’m sure Keith will investigate and get to the bottom of it.

A selection of buttons. 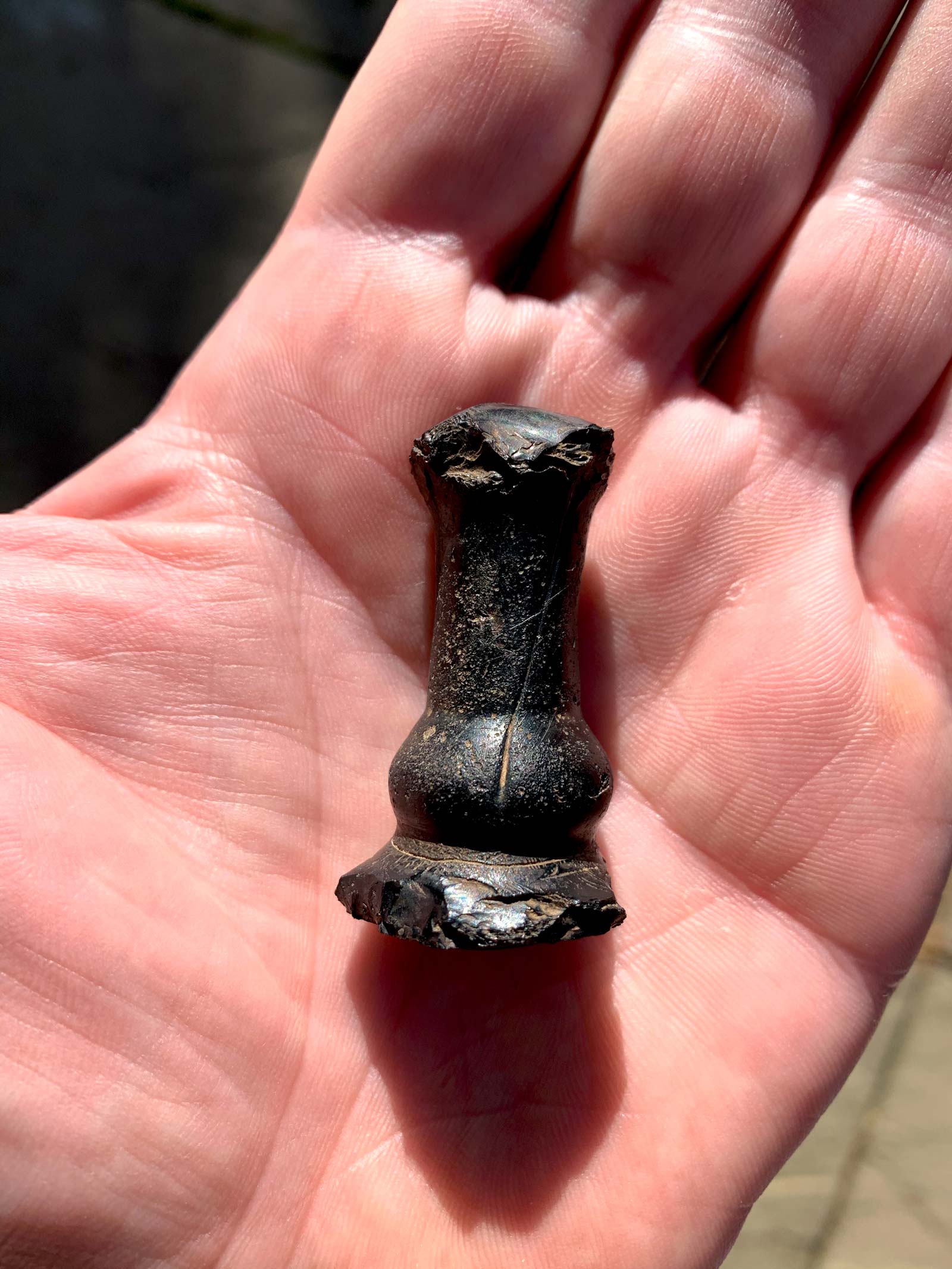 So once again, now that this little project is at an end, it just leaves me to wonder about the objects that I found. As it turns out all of the Roman items were in close proximity to each other which really has my imagination firing. Is it possible that having found fragments of Roman pot, bowls and plates that this could be the site of some kind of Roman dwelling? All of this evidence along with that perfect Dupondius of Trajan would certainly suggest so. With a high status Roman bathhouse in the area I don’t think it’s unreasonable to speculate that there would have been outlying dwellings and that maybe this little hotspot that I appear to have stumbled upon could well be the site of one of them.

Left with that curious and lingering thought I have to thank Keith for this amazing opportunity to be part of his archaeological project. I never thought when I started detecting again just over a year ago that I would get the chance to take part in projects like this. I love that I get to uncover all this history, but even more so that I’m able to share it and contribute to building a picture of how life once was in my local area in times gone by.

And once again this hopefully isn’t the end. I have been told there might be more opportunities coming up in the early spring of 2022, so watch this space, more could be on the way… 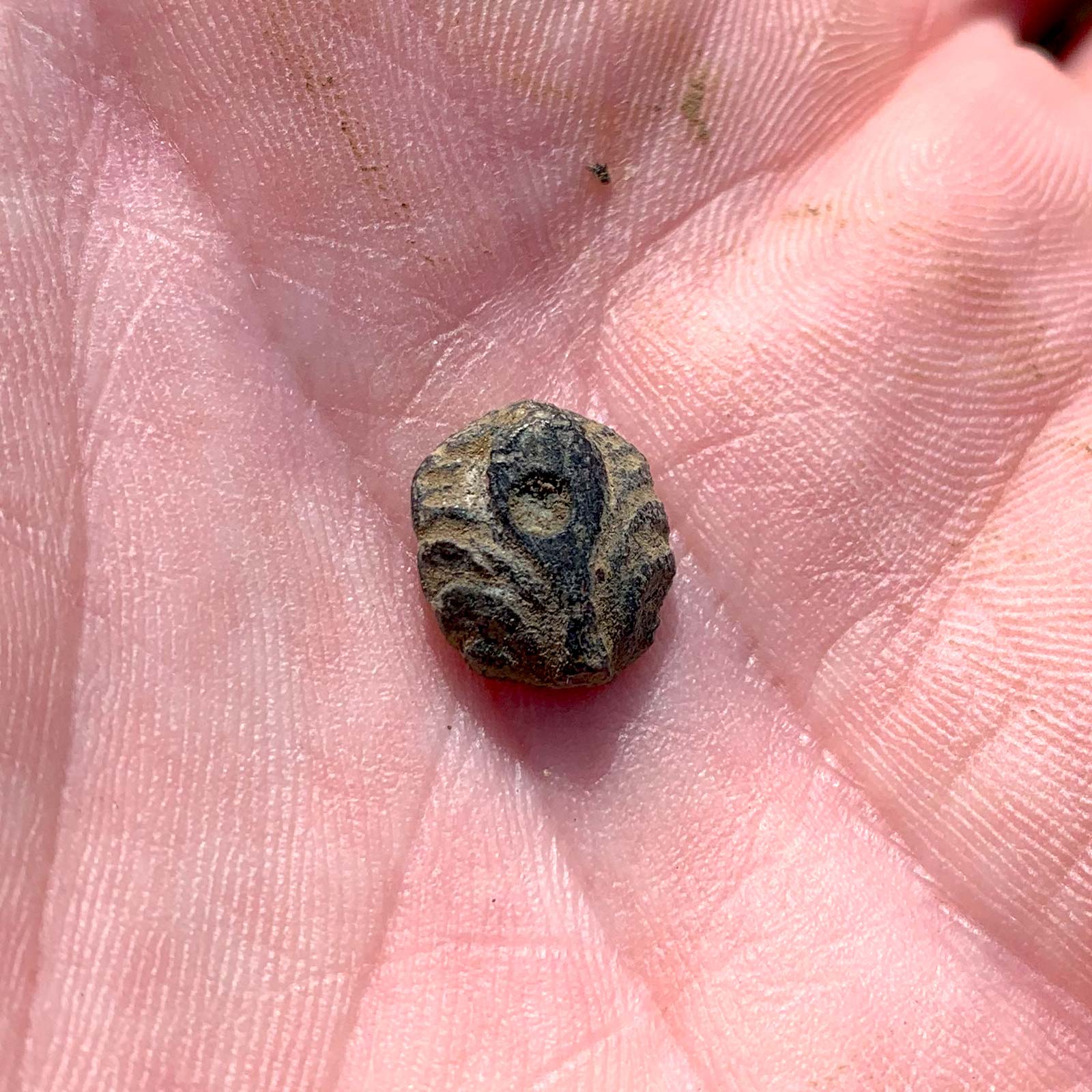 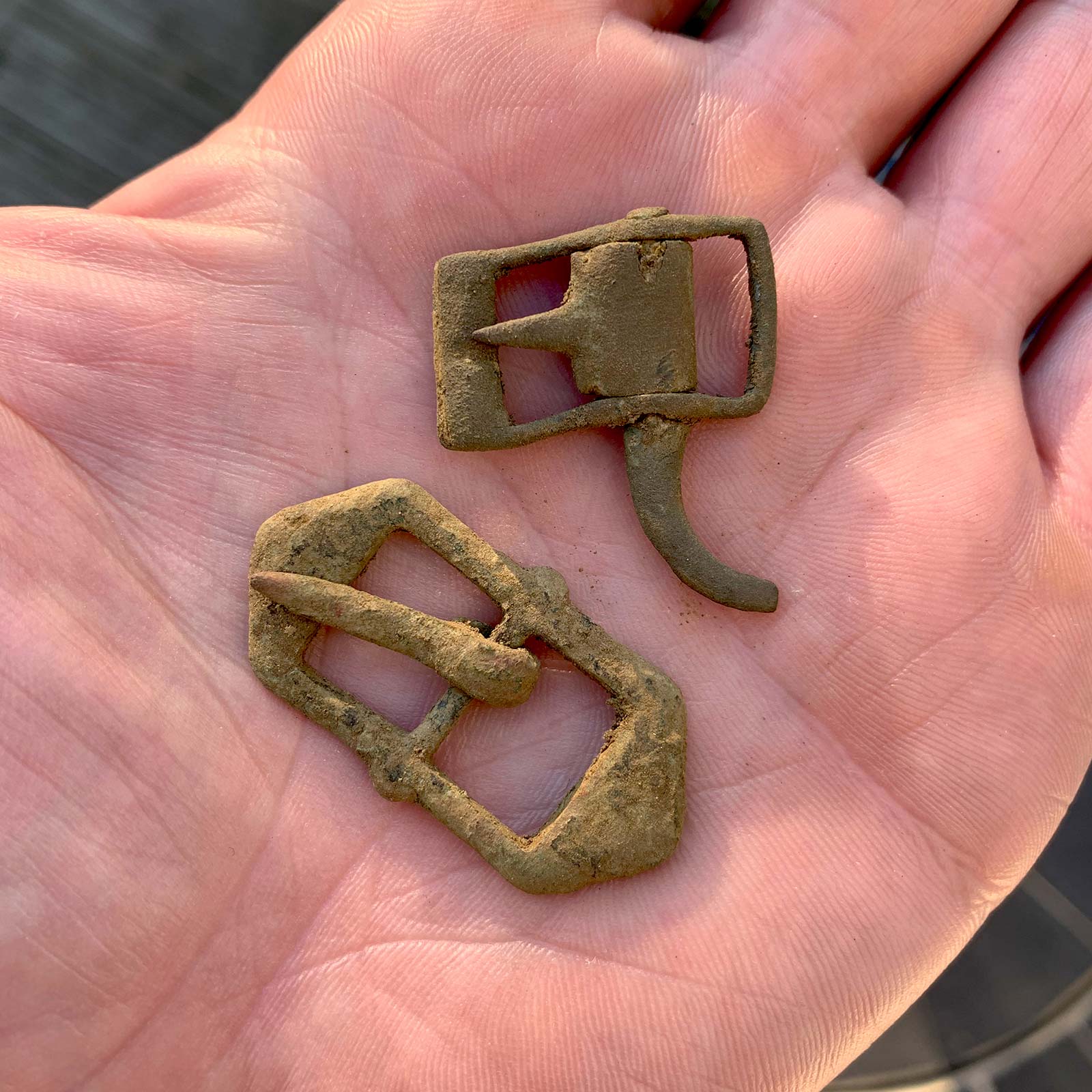