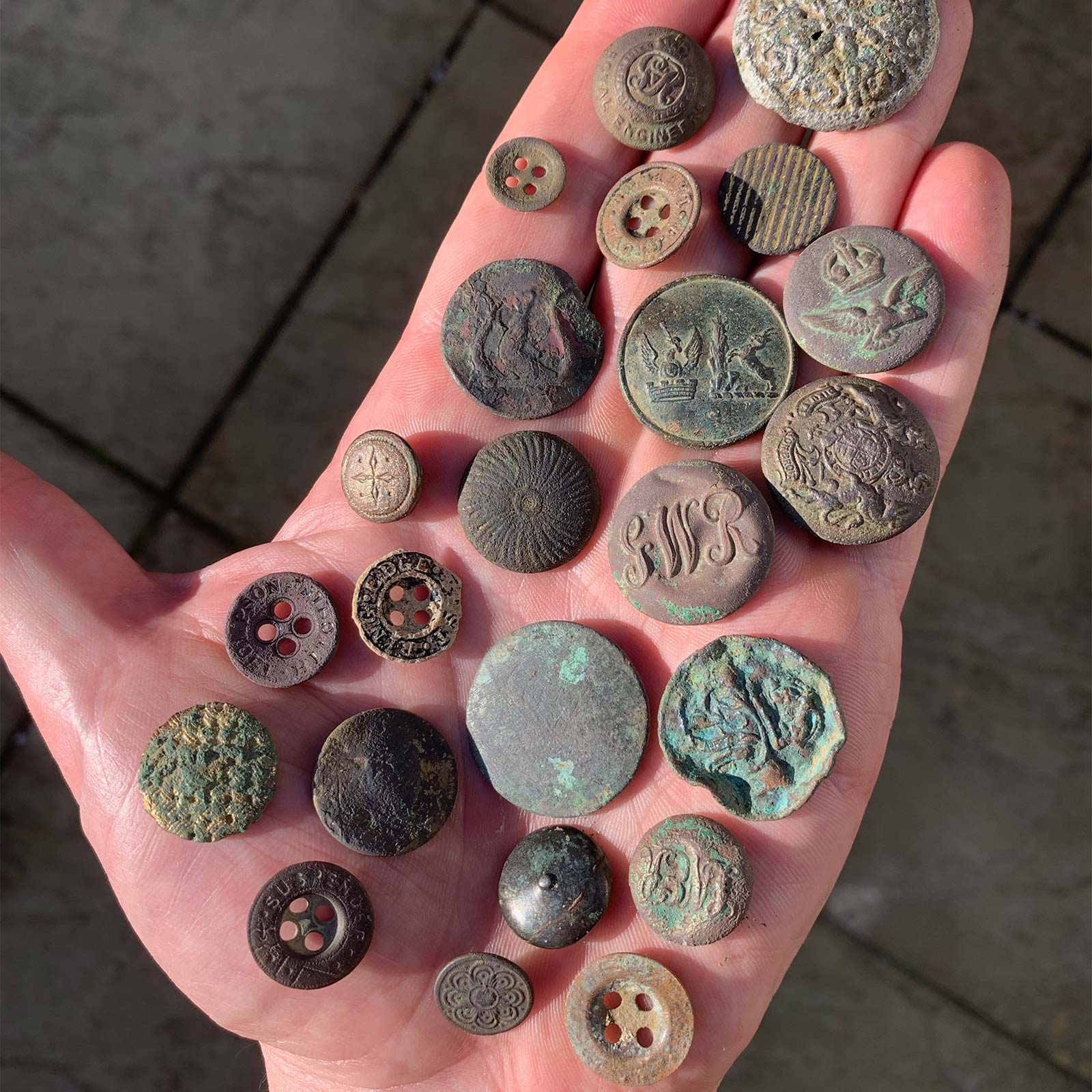 and so the humble, ‘boring’ button…

“…so if you think about how many buttons our predecessors had on their clothes compared to the number of coins they would have had in their pockets is it any wonder that we find many more buttons in our day to day detecting than we do coins?”

Never a truer word said! So far my button collection is much bigger than my coin collection and up to this point all of my finds have come from the same field. It’s a field which I know has been worked by my family for well over 100 years and before that who knows? But the fact it has been worked, stands to reason that workers will loose buttons!

On the whole most of the buttons I find are in fact quite boring, faceless and small. But as you can see from my collection, I have also found some buttons with quite detailed designs and variations in sizes. I do find it quite strange that I should find quite so many military buttons as I’m pretty sure the land I’m detecting on doesn’t have any military history. So what are they doing there? 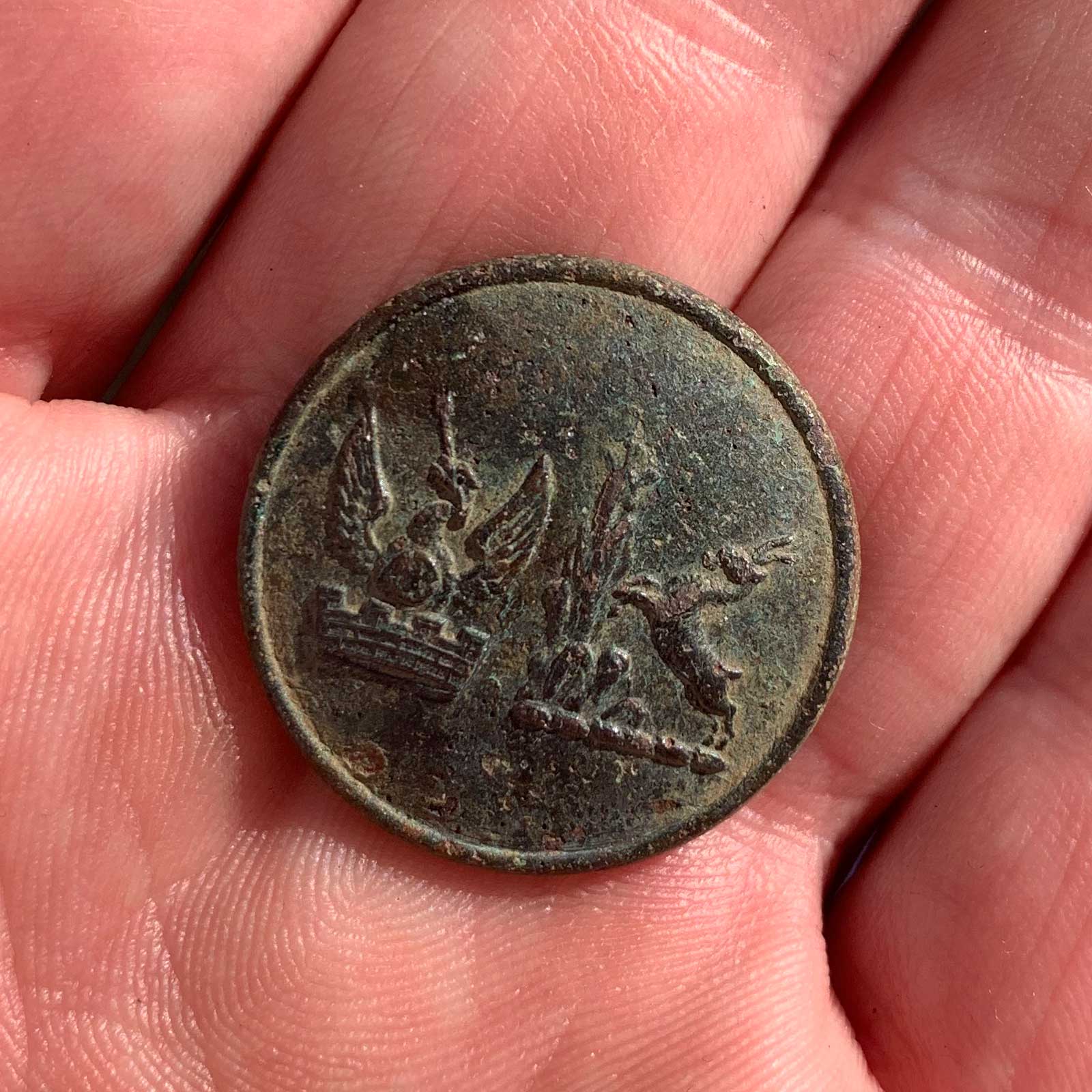 Crests of the Gurdon-Rebow family. 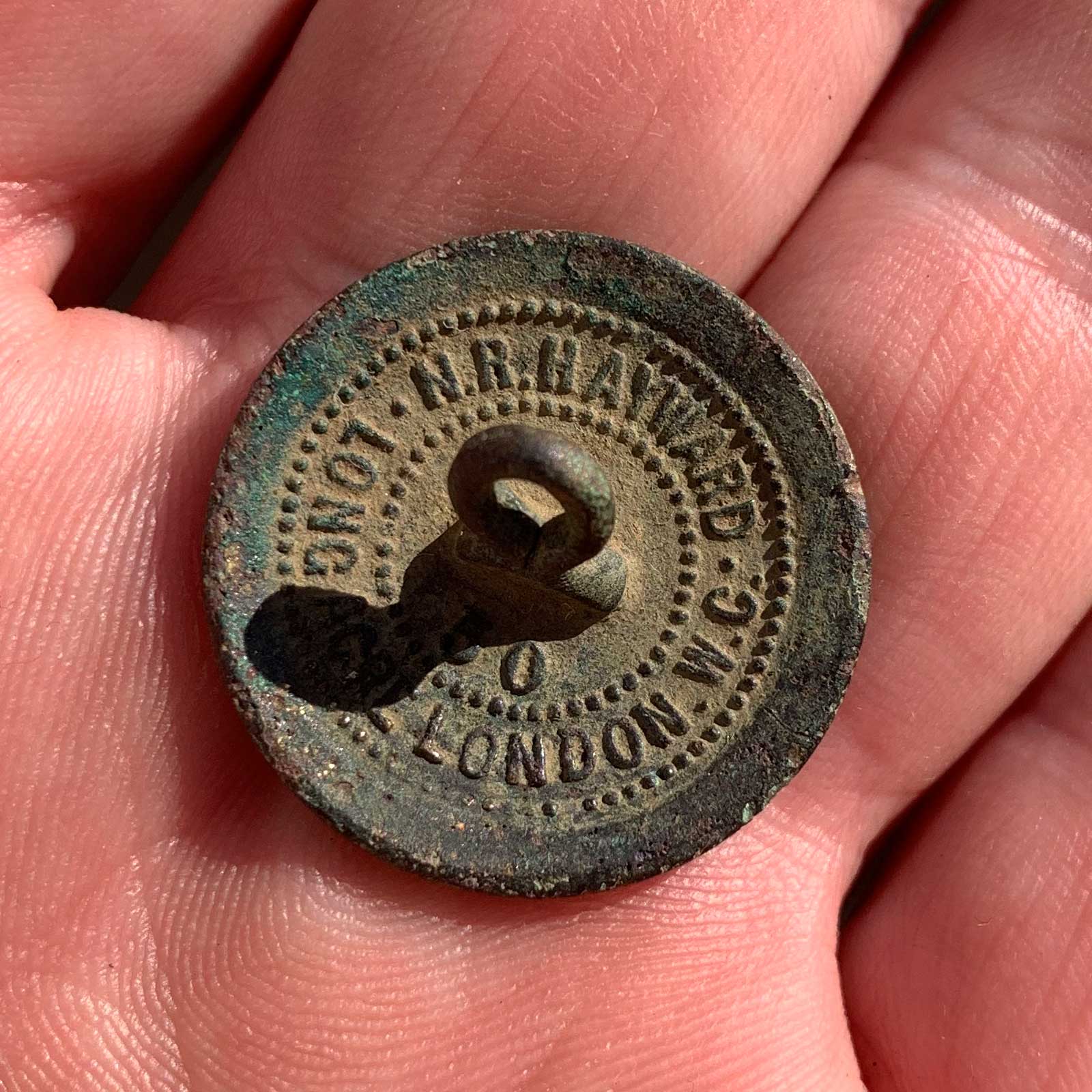 No mistaking the maker here!

One possible answer to this was provided by an old passer by that stopped to have chat. On this particular day I had found a Royal Engineers button which I showed to the elderly gentleman I was chatting to. He asked If I had found any other military buttons which I had and he proceeded to tell me this reason why.

He said that after the two World Wars there would have been a lot of surplus uniforms that were no longer needed. To dispose of them they would have been scattered over the farmer’s fields and ploughed into the land as they were made from biodegradable materials. Over time as the uniform material wasted away the buttons would be left behind for detectorists like me to find.

As yet I have not found any written accounts to back this up, but it certainly would explain why I’m finding so many military buttons! 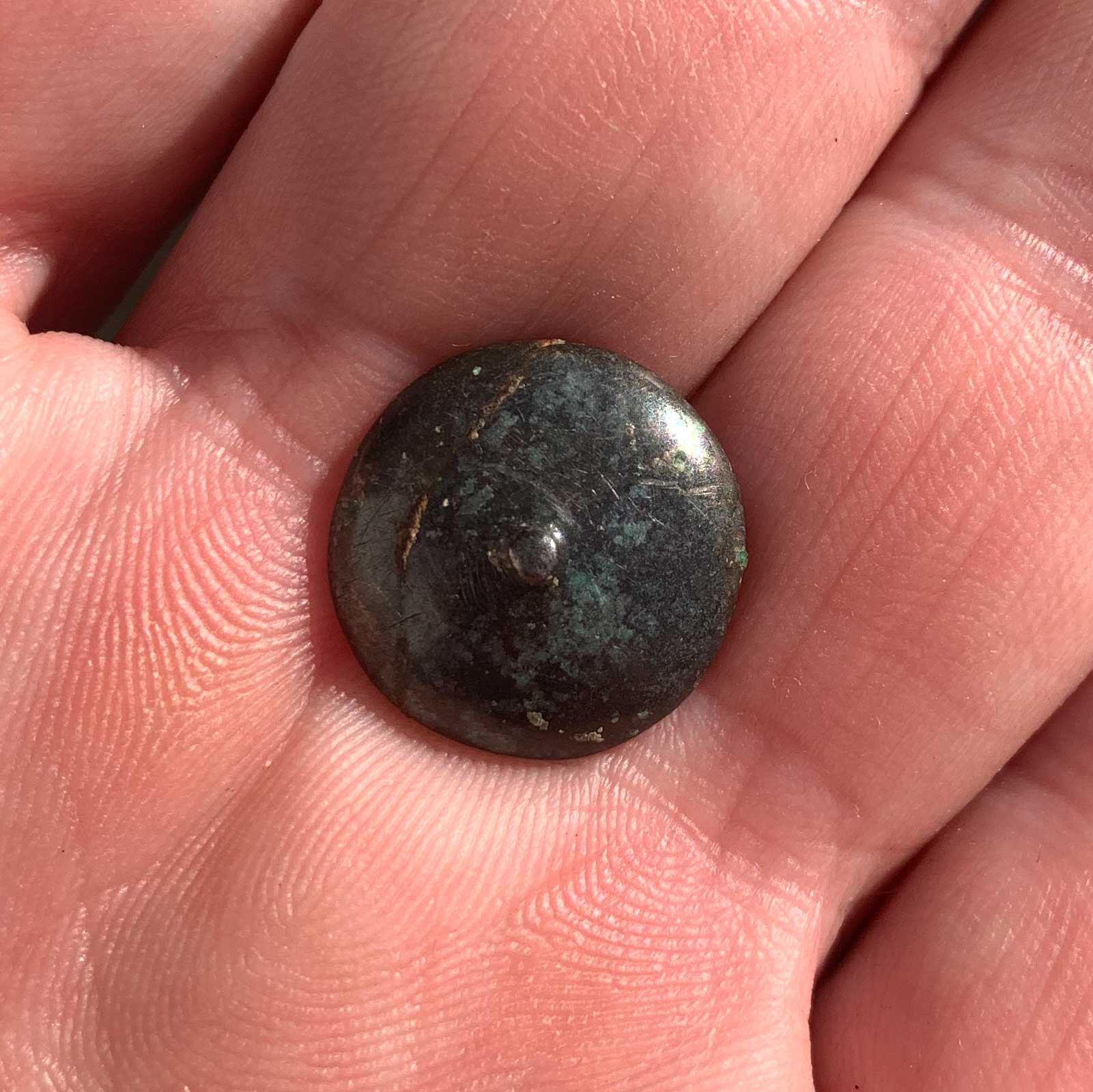 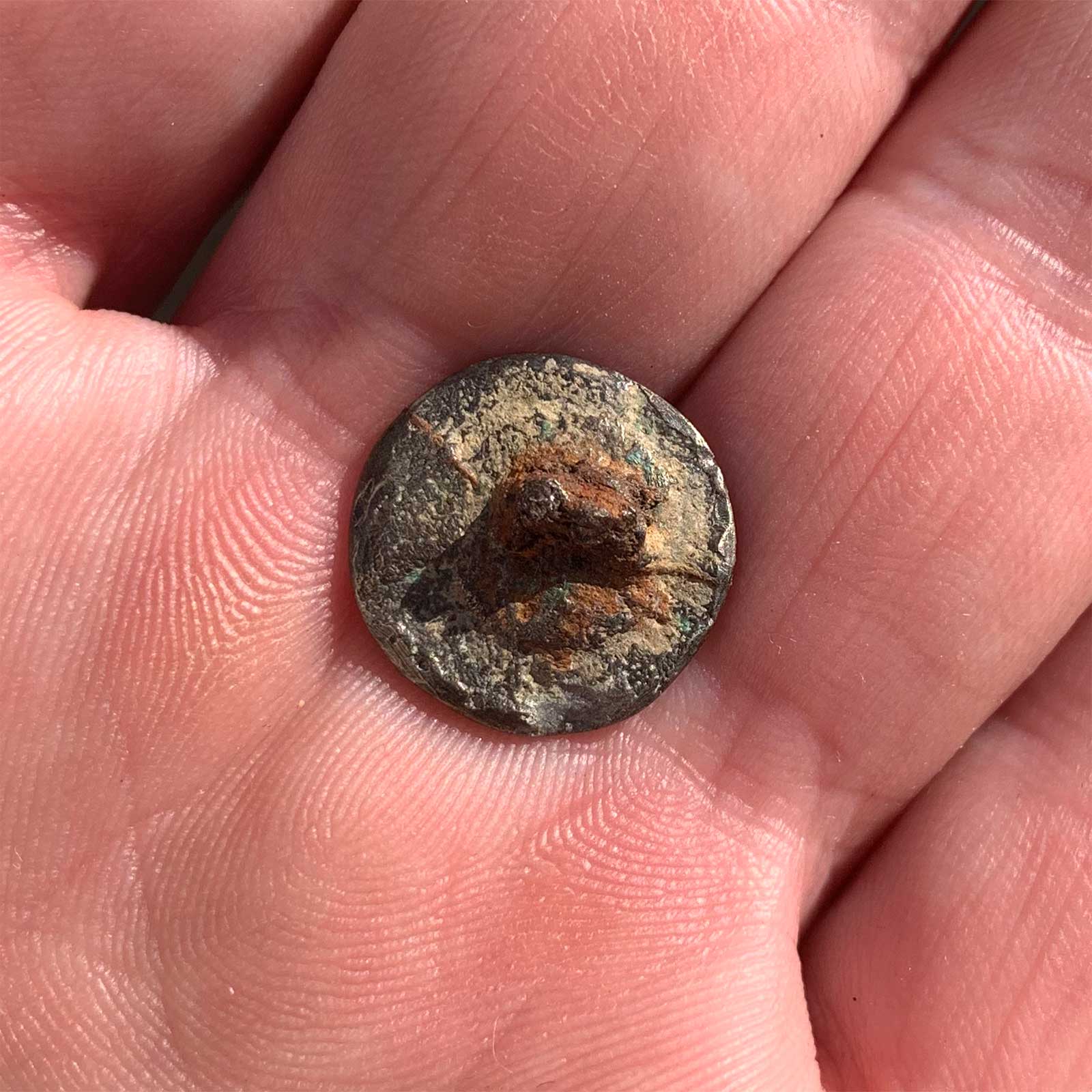 Made of pewter it dates from around 1640.

There is one particular military button in my collection that did not come from a war fought overseas. This pewter pimple button dates back to the 1640’s and would have been part of a uniform worn during the english civil war. Again it’s left to the imagination as to how this button ended up in the field. Was it lost in a fight? Had it pinged off in the throws of passion with a local maid? Maybe his uniform became too tight after a large lunch? Whatever the reason, these buttons really do have a very real and personal connection to the people in the past that would have worn them.

I’m still trying to find out information on many of the buttons I have, so if you see something that you recognise then please do get in contact to let me know any information that you may have.

I have to say that finding buttons doesn’t quite give me the same feeling as finding coins, but looking at my collection of buttons altogether like this does give me a sense of the variety of people that have worked, lived and socialised on this land over the years.

As Terry Seymour said “…and so the humble, ‘boring’ button is a very real piece of social history.” 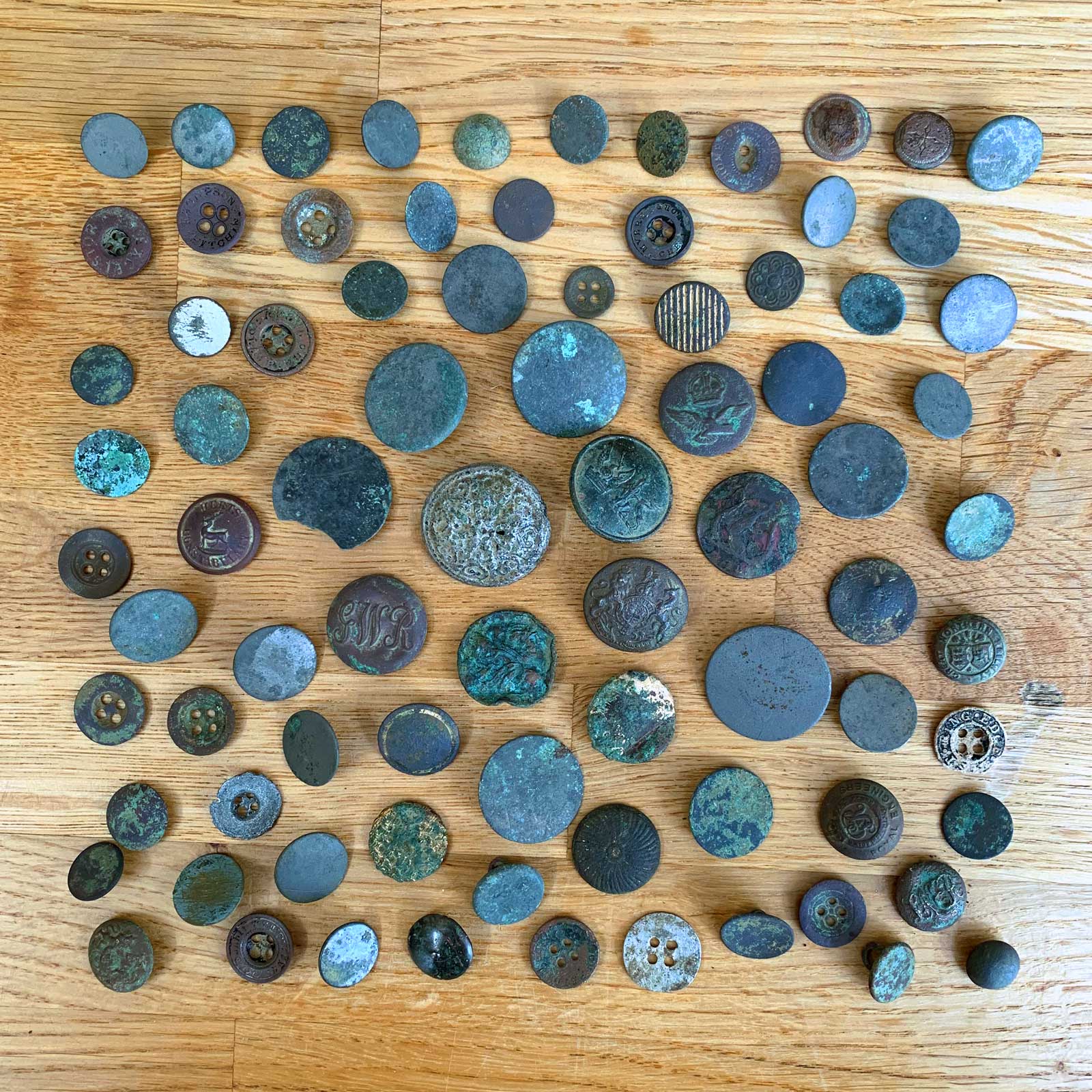 My collection of buttons so far, all from the same field. 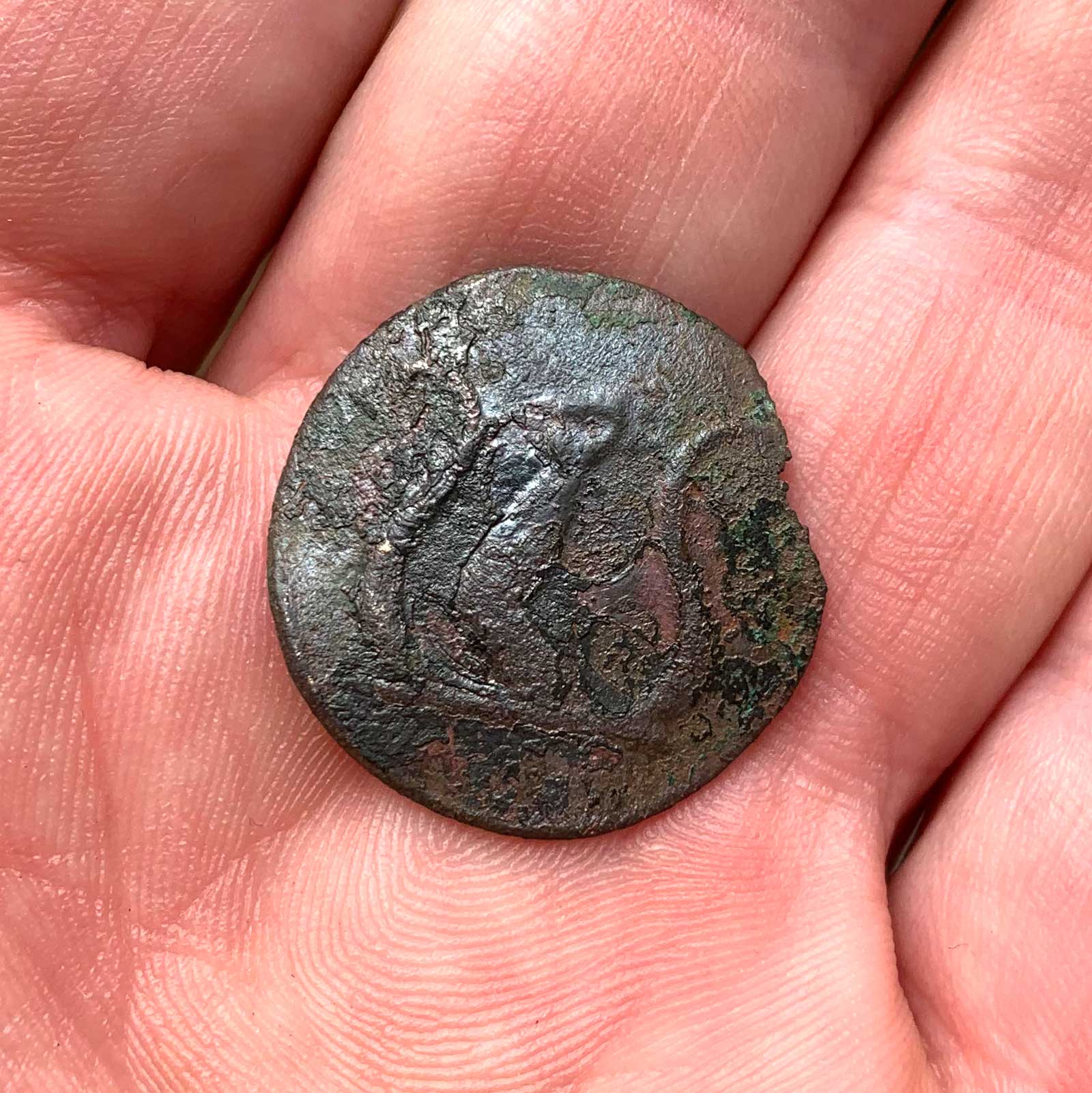 This one is a mystery. 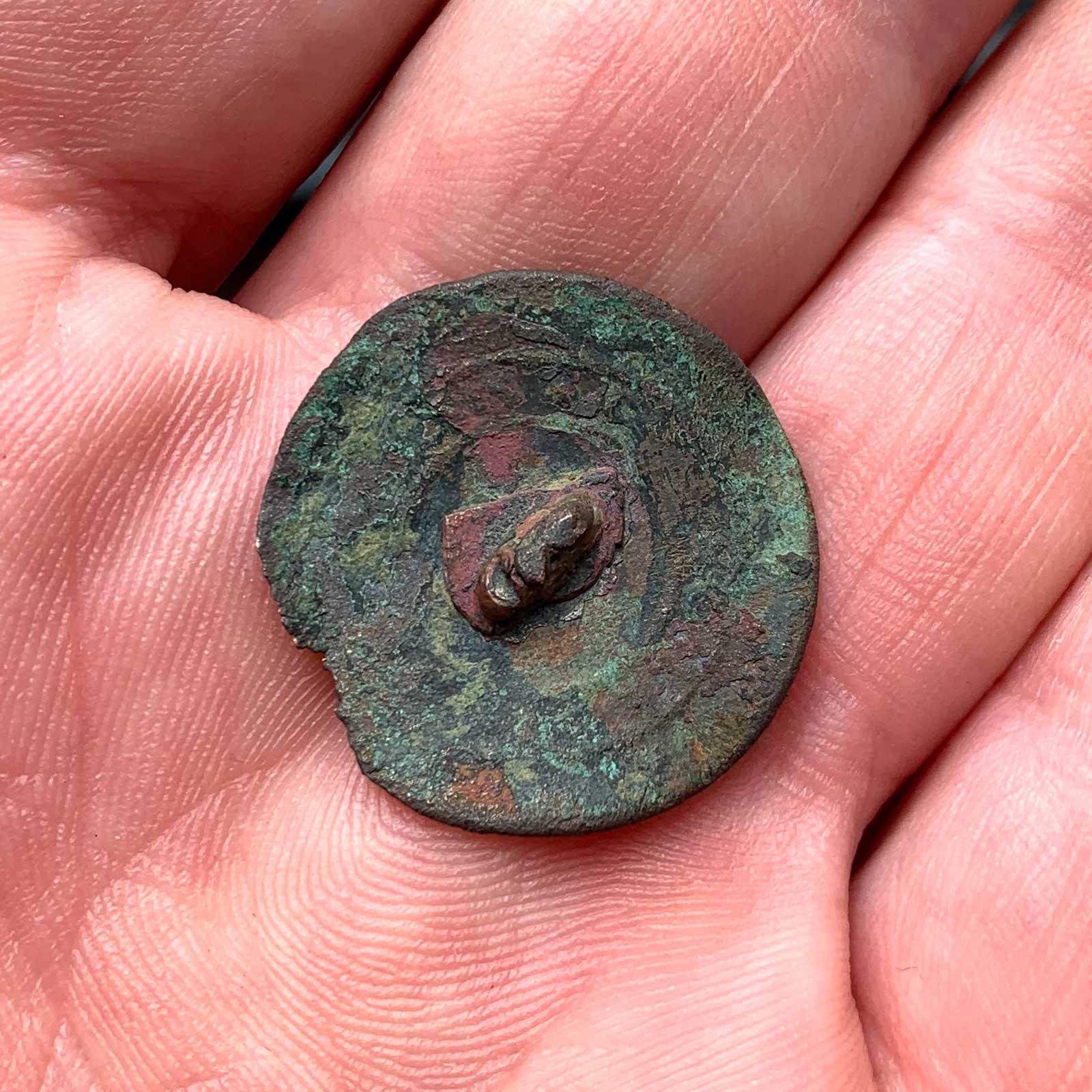 It looks to have some age to it. 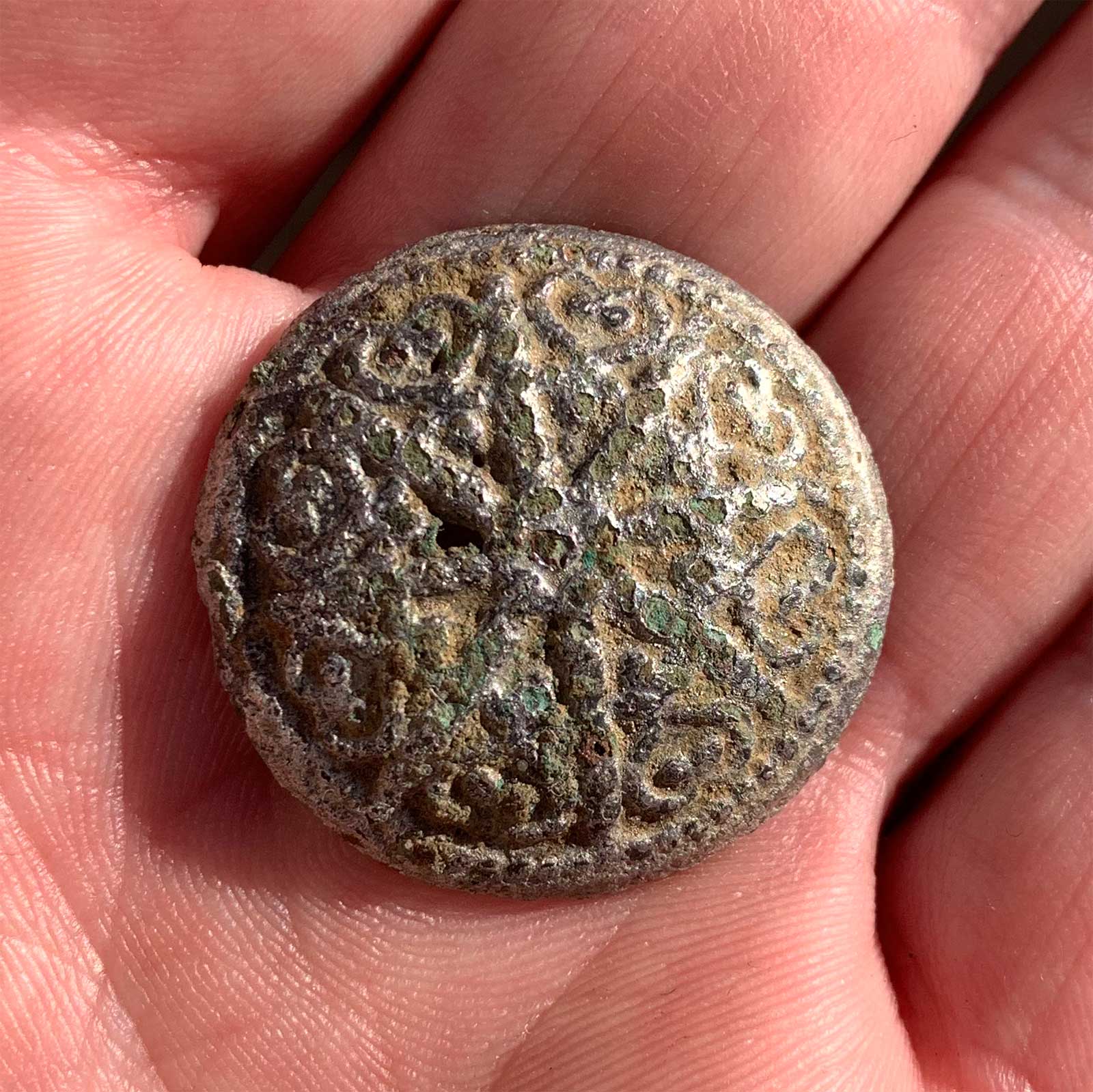 This button looks Tudor in its style. 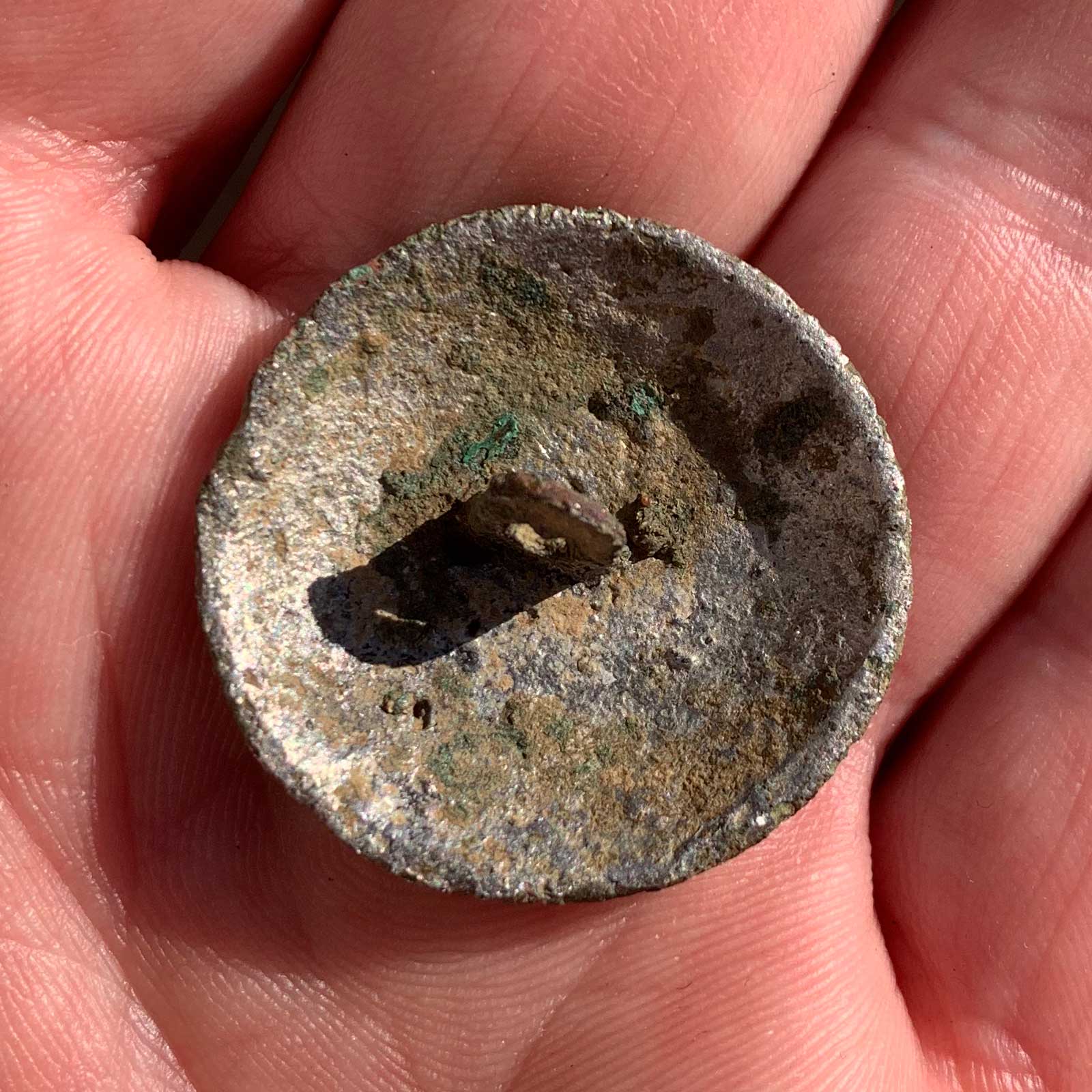 Possibly made of pewter. 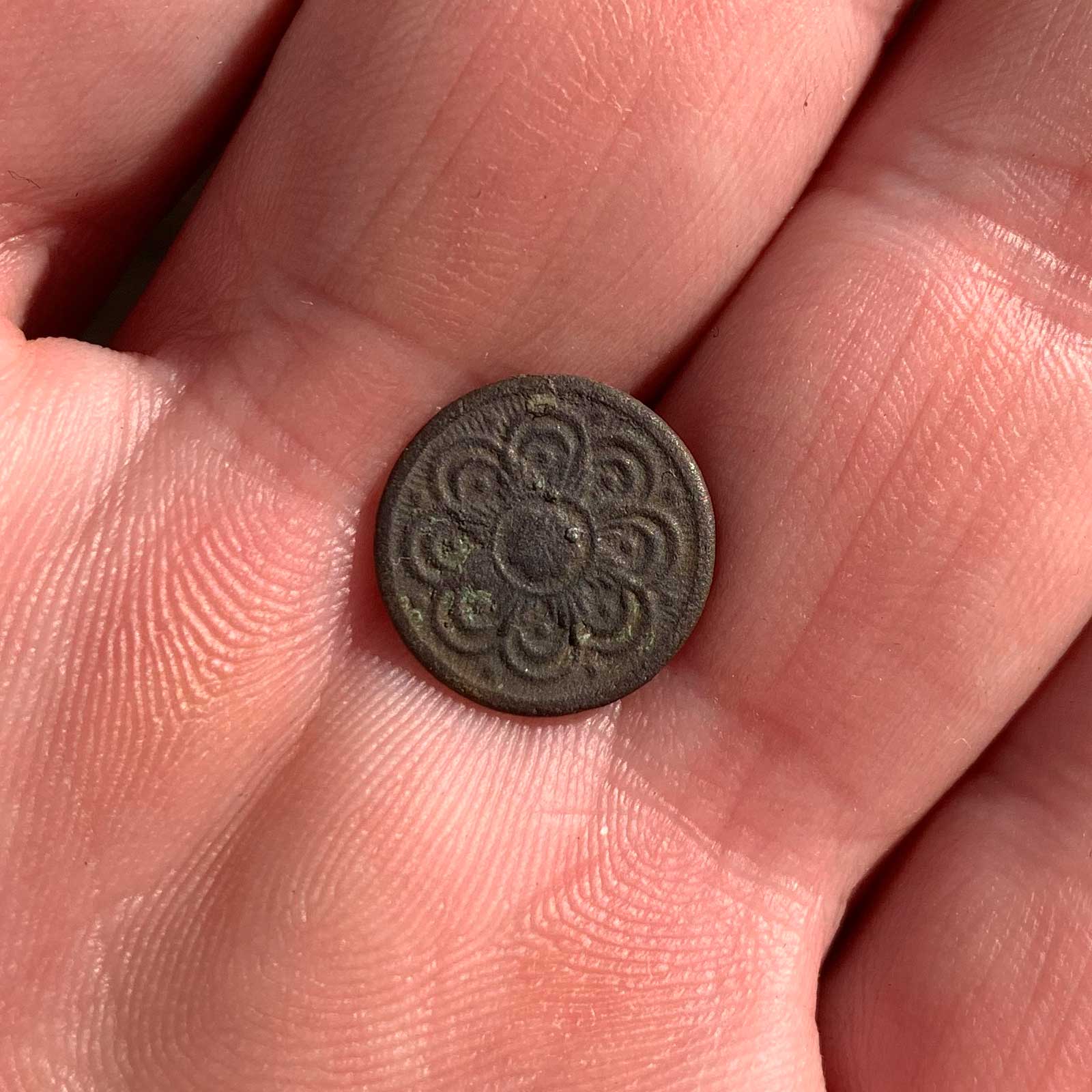 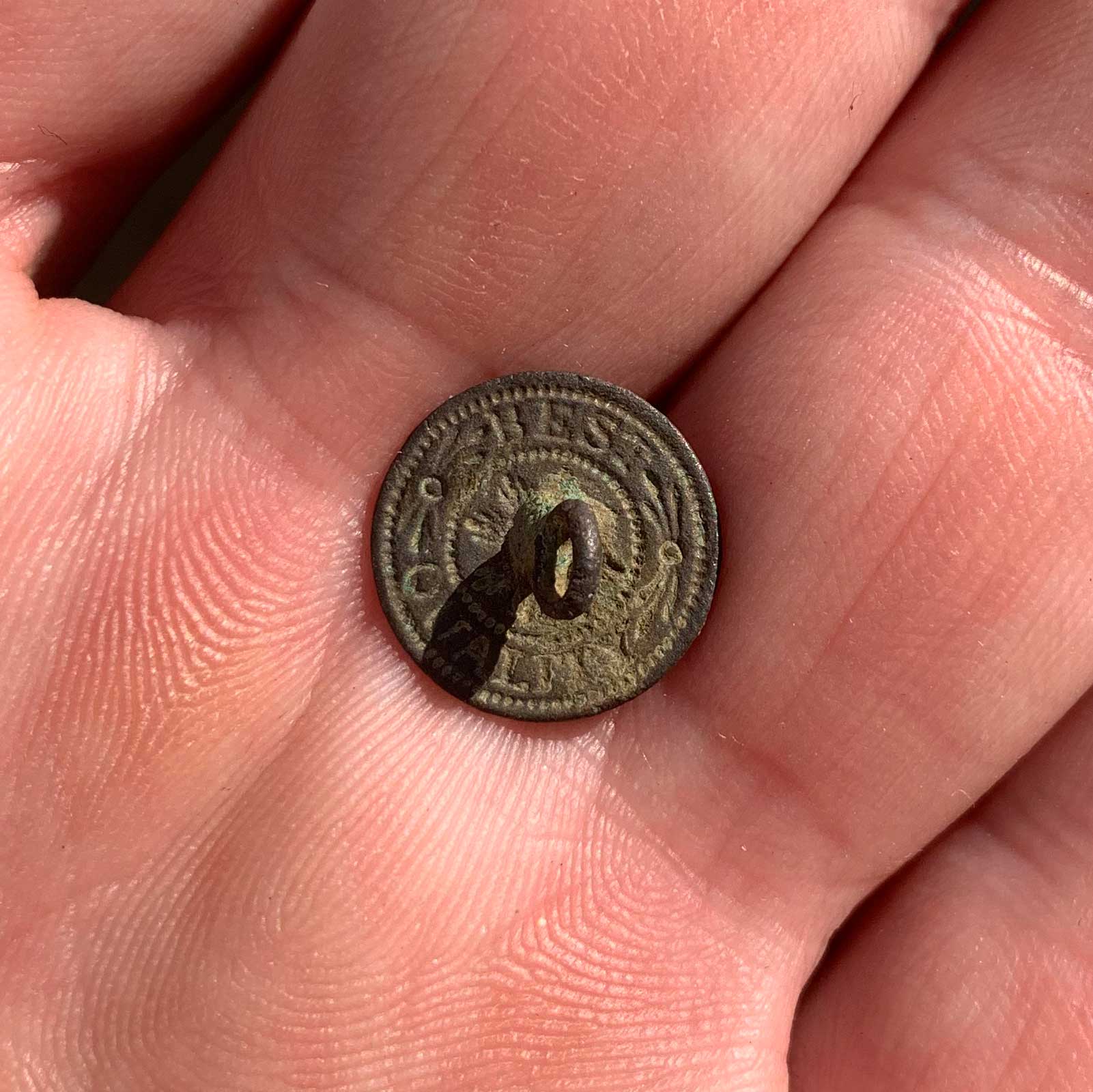